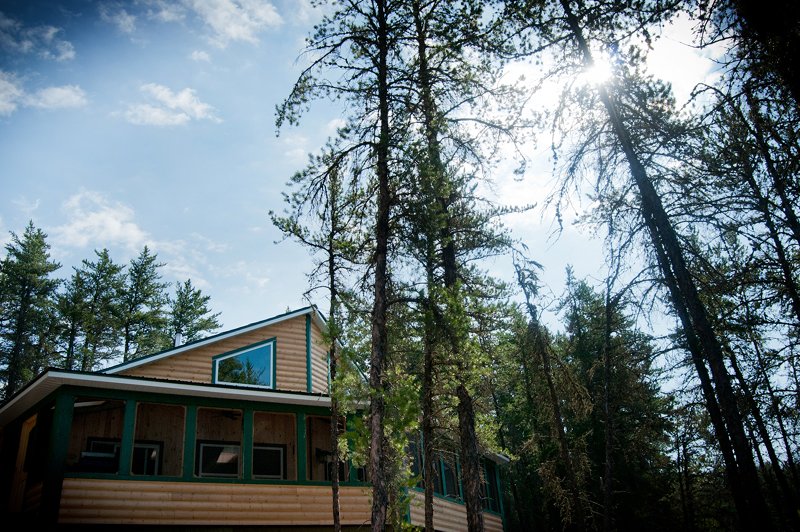 “Pit and his team have done a wonderful job of putting together the perfect gem of an outpost camp with all the amenities,” said Scott. “The traditional Aikens Experience at the lodge is outstanding but for our group, now, the outpost at Lost Lake is perfect. We love going to the outpost camp because it provides you the seclusion and serenity without comprising the nice luxury-type components.”

Scot led a group of seven to Lost Lake this July, which marked his fourth trip to our Lost Lake outpost cabin. The 1,320 square-foot cabin with four bedrooms, two showers, a dining room, full kitchen and giant wrap-around porch opened in the summer of 2013 to much acclaim.

The Minneapolis Star Tribune called Lost Lake the nicest cabin in the outpost business. “I don’t know if the term ‘luxury outpost’ exists,” Pit said in the article. “But I think we are creating a new genre here.”

Scot, for his part, appreciates that Lost Lake offers what many other outposts do not. “I’ve been on a lot of fly-in trips and generally speaking when someone says outpost camp, it fits the definition of an outpost,” Scot said. “There’s an outdoor latrine, running water or electricity might be hit or miss, and you’re roughing it to a degree. Not at Lost Lake. Pit and the team have raised the bar. There are so many things you’d never expect at an outpost, such as a gourmet kitchen, beautiful docks, an ice machine, Sirius radio.”

“This year they added a fish cleaning facility on Lost Lake so you could clean fish in an area protected from bugs or weather,” said Scot, who appreciates that both Lost and Aikens Lake offers quality multi-species fishing as opposed to strictly walleyes. “Is it necessary? No, but they want to continue to raise the bar and that’s the neat thing. They solicit feedback from everyone who stays there and they listen because they really care about their guests.”

Scot and his group are skilled, serious anglers, so again this year they enjoyed very good fishing, with Scot landing a trophy walleye. But fishing is only part of the trip’s appeal. The group considers Aikens a two-pronged trip, that’s about both fishing and spending quality time together in a beautiful setting.

This year, for the first time, they saw two moose swimming across the river.

“Last year we saw a black bear on Lost Lake, up on a hillside while we were fishing by one of the islands,” recalled Scot. “It’s cool to sit in your boat and watch this bear rummage for food around the hillside.”

The group has gotten to the point where they can just about finish one another’s stories.

“We love to spend time together, telling stories and reminiscing because we’ve known each other for such a long time,” said Scot, who’s also made a trip at our Great Gray Owl Mini-Lodge. “We enjoy a lot of laughs, and you’ve got to have some thick skin. You gotta be able to dish it and take it.”

One fun fishing story from this year’s adventure includes a pike that desperately wanted to be caught. One of the guys hooked a solid fish that broke the line after a short fight. A while later, another group member in a different, nearby boat hooked a fish and was immediately bit off.

Less than a minute later, a third group member hooked a fish and battled a 36-inch pike to the boat. When he landed it, he saw not only his jig in the pike’s mouth but three other jigs––the two from his comrades plus a previous jig from some other unlucky angler.

The group appreciates the ability to easily fish both Lost Lake and Aikens Lake, with docks and boats ready to go on each side of the peninsula.

“It helps to have such well-maintained equipment, especially at an outpost,” said Scott, who over the years has needed Aikens staff to bring extra minnows to the Lost Lake cabin because they were catching so many fish. “Nothing is more frustrating than something not working, especially when you’ve looked forward to this trip and if you’re at a remote outpost with bad equipment you’re in a bind. Pit and Pat have done a great job with Lost Lake of making everything first rate.”

“This isn’t your typical 30- to 40-year old plywood A-frame construction, this is high-quality craftsmanship,” Patrick said. “We didn’t just put up a building and try to do it as cheap as possible, we invested for the future of this business and the Lost Lake Outpost is going to be a very unique luxury option in this industry.”

“Years ago, after about our 4th or 5th trip to Aikens I mentioned to Gerry, ‘You guys should think about adding an outpost,’” Scot recalls. “Gerry said, ‘Ironic you mention it, we are looking at that.’ Early plans were in the works for Lost Lake even then.”

Little did Scot know at the time that his idea for a future outpost cabin would become his new favorite fishing paradise.

Did You Hear What They’re Saying About Aikens?